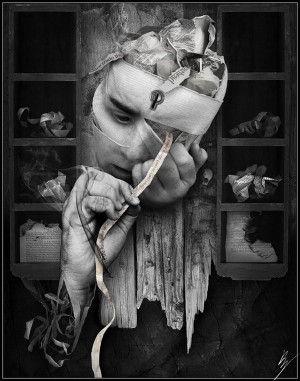 The whole problem is that we think of ourselves as ourselves. That is, as objects – endowed with sentience, perceivers of the world, stumbling our way through life burdened by circumstances over which we have no control, all the while pretending that we do. And always lurking in the back of our mind is the knowing that ultimately we are going to die.

Life as an object is tough.

Seeing ourselves as objects is of course inevitable, given how we regard time and space as separate from us. I mean, if you think that objects exist in space out there, how would you ever see yourself as anything other than a perceiver of them? If we believe that objects are real, we must necessarily also believe that whatever perceives them is itself an object. Be it a brain, a soul, or a person, it must be some spatially distinct entity – and such an object, we refer to as a subject.

Let me be clear. Objects do not actually exist. Time and space are not objectively real. I just want to point out that if anyone believes that time and space is out there, they must admit that, logically, objects must be perceived by other objects (which we call subjects) – for as long as objects are regarded as things-in-themselves, the notion of an object necessarily involves the notion of a subject, since to be a thing-in-itself specifically means to exist independently of a perceiving subject. In other words, according to our misconstrued conceptual schema of reality, objects must – simply by how we define them and think about them – be perceived by a subject.

And since most of us do believe that subjects and objects are real, whenever we encounter an object we inevitably see ourselves as its subject.

This is the mistaken identity from which we seek to free ourselves.

And so, if we are to awake, we must rid ourselves of this notion of objects existing in their own right. It’s not the objects as such that are the problem, but their subject, and by abolishing the notion of an object as a thing-in-itself we thereby abolish the notion of its subject also – and that is why I stress the importance of understanding that there is no external world.

However, simply understanding that objects and subjects don’t actually exist isn’t enough. Conditioning is too strong. Decades of objectivizing day in and day out have established a habit that cannot be overcome by intellectual understanding alone – and it’s objectivization that is the real obstacle to awakening.

Objectivization can be understood as the functional aspect whereby this-which-we-are perceives what it is as an object. It’s a way of cognizing by means of conceptualization. We fabricate objects in the mind by turning what is nothing but pure perceiving into objective concepts such as “a lamp”, “a coffee mug” and “the moon” – and since we regard them as independently existing entities, we imagine ourselves into existence as their subject, namely the very subject whose perceiving they are supposedly independent of.

So, all of this can be summarily understood as follows: this-which-we-are, or pure consciousness if you will, perceives itself as an object (such as “a lamp”) by means of an subject (such as “myself”) – neither having any existence whatsoever other than conceptual – and thereby manifests this entirely illusory objective world and self. And all of this takes stage where there is nothing but pure subjectivity, which is no thing whatsoever.

It’s a division through conceptualization. In conceptualizing, pure experiencing is divided into interdependent conceptual counterparts: “subject” and “object”, “self” and “world” or “in here” and “over there”. We then add layer upon layer of other ideas to this imagined entity in here, thereby creating an entire edifice of figments that come to constitute our ego – the self image.

But all of these ideas are built upon the idea of a subject – and when conceptualizing ceases, the very linchpin of our identity is removed, because the subject is no longer fabricated in the mind. In this absence, looking stops and seeing begins – and no longer bound by objectivization, we find ourselves, simply, awake.