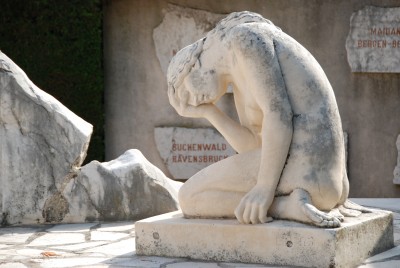 After we’ve deconstructed the notion of an objective reality, it’s now time to wade through the debris and pick apart whatever conceptual structures still remain that allow us to misperceive reality. One such notion is that of containment.

We think that emotions exist within the body, but they don’t. Feelings aren’t ‘in the gut.’ Look to your direct experience – do you experience feelings as existing ‘within’ the body? Isn’t the body itself a sensation? Are there not merely some free-floating sensations present, some of which you call ‘the body’ – but which themselves don’t contain other sensations? Do you ever experience one sensation as containing another?

Sensations don’t exist within each other. A feeling sensation doesn’t arise within another feeling sensation. A visual sensation doesn’t arise within another visual sensation – or within a sound or a touch sensation. Our idea of a ‘body’ however, is fundamentally dependent on this type of grouping of sensations – as a single momentary sensation is not at all what we picture when we think of our body. Instead, our minds conjure up a multitude of sensations—visual, auditory, tactile and emotional—that together seem to form the physical object we call ‘body’ – which would be the object that ‘contains’ all of these sensations.

When we at last realize that this model of the body ‘as a container of sensations’ isn’t representative of anything in our direct experience, we can finally drop the notion that containment is a viable model of what’s actually going on. Thinking in terms of containment isn’t based on our direct experience – it’s based on the universe-model of reality wherein objects are physically contained by other objects.

So look for yourself, right now.

Are thoughts in your head? Do the thoughts arise within the sensation that we call ‘head?’ And are emotions experienced as being in the body? Isn’t the body itself merely a sensation?

Thoughts only seem to come from our heads because we believe that they do. But if you envision thoughts as coming from, let’s say, the belly instead (try to put your attention on your belly and ‘think thoughts’) you’ll see that pretty soon it starts to feel as if they do – which demonstrates that ‘containment’ is imagined rather then factual.

Thoughts seem to arise from wherever we believe they do. Drop the assumption that they’re located to begin with, and thoughts simply cease to arise from somewhere in particular – and instead arise without being located anywhere at all.

We also feel that the tactile feeling of, for example, our hand is ‘within’ the corresponding visual sensation of that hand. That is, I look at my hand and it seems as if the feeling of it resides within the visual boundaries that make up the outline of my hand. But when I investigate closely I find that this isn’t the case at all – the feeling of the hand is merely a free-floating sensation that isn’t located within the visual field whatsoever. It is just a thought that suggest it does.

It’s easy to believe when we look down and see our belly, that emotions exist in there – but in where? That belly is nothing but a visual sensation – and emotions doesn’t exist ‘within’ visual sensations. Emotions exist on their own, uncontained by any other sensation—whether visual, tactile or otherwise.

By seeing that nothing is contained in direct experience, we gradually lose the ability to believe that we’re actually experiencing objects, such as one’s body, which is a giant step towards liberating the knowing of ‘I am’ from being object-bound – to instead allow for the sense of being to expand and encompass the entire field of experiencing—equally and neutrally—as the sensations of reality in the absence of containers are clearly revealed as a unified whole.

And knowing is not some ‘thing,’ some positive entity that is situated within a larger reality – no, knowing is all there is to reality as such and ‘it’ is no thing at all – it’s a pure negative, the very absence of objectivity, and is none other than our own being. Not a being, but be-ing.

Non-objective, it cannot be ‘known.’